creativity, complexity, and how we learn in the digital age

Earlier this week I was very fortunate to be invited to the Digital Humanities summit hosted by the Higher Education Academy. I don’t profess to be anything like an expert in the Digital Humanities (or ‘DH’ to those in the know), but the HEA had pulled together a group of people whose expertise they believed would be useful in discussing the possible futures for this emerging area of scholarship.

The day consisted of two group-based practical workshops aimed at trying to visualise both current and future interpretations of DH. I had the opportunity to work with some wonderfully creative people, and given my lack of experience in this area it was useful to begin with an attempt to visualise the current landscape.

For the first workshop our group used the metaphor of a kitchen to describe DH, with a range of ‘ingredients’ (digital artifacts, skills etc), ‘rules’ (policies, legal requirements, IPR etc), ‘people’ (chef = thought leader, funders = restaurant backers, customers = end users etc). We also put forward the idea of a ‘recipe book’ in which the recipes might be created using a range of combinations of the above:

The second workshop began with a discussion of the ways in which DH might evolve. Although I don’t have a detailed knowledge of DH, I was instantly struck by what I felt were similarities to the Technology Enhanced Learning field. To put it briefly, there has been great enthusiasm (and money) around the TEL field over the last 20 years, but this has more recently begun to give way to a sense of pessimism due to the noticeable lack of evidence that technology has enhanced learning.

Despite the enthusiasm around DH, I can’t help but feel that the need to talk about ‘digital’ humanities as something separate from ‘humanities’ represents a possible failure of humanities disciplines to embed technology effectively. The similarities with TEL and e-learning are clear: the more the ‘digital’ is perceived as something separate from the discipline itself the less likely it is to become seamlessly integrated into that discipline. 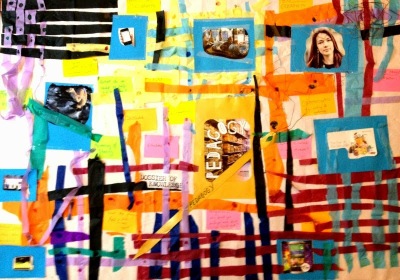 However, our apparent pessimism soon gave way to rampant creativity! In attempting to visualise a future of DH we used the metaphor of a tapestry, in which the tapestry represents a discipline and the ‘digital-ness’ is woven seamlessly through. We felt there was a strong skills acquisition element to DH, and these skills were written as post-its and also woven in to the fabric of the tapestry. The need for progress to be driven by pedagogy represented another similarity to the TEL field, and pedagogy was therefore placed squarely at the centre of the tapestry.

Having pursued the metaphor to its logical conclusion, my feeling – and perhaps hope – is that in a generation or so DH will cease to exist. Its disappearance will represent the successful integration of the digital into humanities disciplines, facilitated in part by the gradual permeation in the sector of academics with increased digital skills.

Thank you to the Higher Education Academy for allowing us all to get creative, and a big thank you to my #dhtapesty team members for their inspiration and expert weaving! A Storify record of our presentation can be viewed below, and for a full record of the event please use the #teachDH hashtag.